5 years of the « anti-prostitution » law, who has really benifited from it ? Protest on 13 avril 2021 in front of the National Assembly

5 years of the « anti-prostitution » law, who has really benifited from it ?

Protest on 13 avril 2021 in front of the National Assembly

What use is the law?
The government communicates on the “pathways out of prostitution” which would have “helped” 300 to 400 people over the past 5 years. The initial objective was however to help 500 to 1000 people per year. Making access to rights conditional on (among other things) the cessation of a legal and taxable activity is discriminatory and stigmatizing. Migrant sex workers, in order to hope for a hypothetical documentation, have to undergo the surveillance and control of departmental commissions with 20% refusals, risking being sent back to a detention center, in addition to a prior hierarchical and drastic sorting of their cases, which results in numerous refusals.
Approximately 5 million euros are spent each year to finance the “exit routes”, but only 600,000 euros are used to finance the AFIS, an allowance of 330 euros per month that does not allow for a decent living. Since the law, subsidies, approvals and “aid” are more and more conditioned to the “exit from prostitution” to the point that even in response to the health crisis, sex workers’ associations are discriminated against and/or excluded from aid schemes.
Silence, we’re dying
The health crisis has revealed the major dysfunctions of a system that claims to protect us but that has reduced us to survival, to self-organize solidarity and to appeal to the generosity of the public for lack of an adequate response. We have never seen so many murders, suicides and deaths from poorly treated co-morbidities because of an overloaded health system and a lack of social protections and rights.
Disastrous results
Exploitation of minors is at an all-time high, human trafficking is on the rise, violence is on the rise, precariousness is widespread, health is being sacrificed, sex work has not been abolished, it has just been made more dangerous to carry out in degraded conditions never seen before.
Our demands :
Complete decriminilization of sex work (municipal restrictions, penalization of clients, of mutual or third party aid)
Unconditioned documentation for migrant sex workers
Decent social assistance equivalent to existing minimum social benefits in force, including aid for housing and training without conditions (such as language, status, stopping sew work, etc)
Effective policies against trafficking, violence and exploitation that really protects the victims and are not diverted towards fighting sex work
Access to common law, including labor law (compensation, social protection, training, vacations, retirement, unemployment insurance, labor court, etc.)
An end to legal discrimination (banks, parenting, housing)
Meaningful participation of sex workers in all policies and programmes that affect them from design to implementation and evaluation 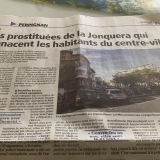 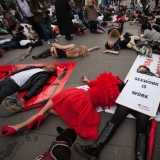